Indian Retiree Wages His Own War on Potholes 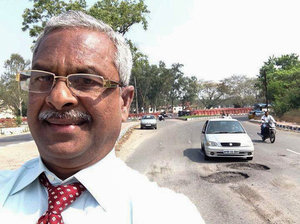 The number one transportation complaint I hear when out talking to members of the public? Potholes of course. We don’t have to let them get us down though. Retired people unite to fight this scourge! Okay, that may be extreme but fighting potholes is how one man in India is spending his retirement years.

NPR says 67-year-old Gandgadhara Katnam has filled about 1,100 potholes on the streets of Hyderabad in the past five years. He carries bags of gravel, tar, a spade, brooms, wire brushes and a crowbar in the trunk of his Fiat in case he sees a pothole or is alerted to one via Facebook.

Once a pothole has been identified, Katnam clears it of debris and standing water, pours in the gravel and tar, levels it off and waits about 30 minutes for it to set. He puts cones around it to keep people from driving on it until it’s solid, then he’s back on his way again, usually in less than an hour. And each time he patches a pothole, Katnam takes a selfie with it.

Katnam’s obsession with potholes is fairly new. Five years ago, while driving to work, he hit a massive pothole and splashed muddy rainwater onto a woman and a child. Their clothes were ruined and he felt ashamed. He apologized but didn’t feel that was enough, so he took action.

He started with the potholes on a stretch of road just outside his house. At first he did it all himself, but has since started a group of laborers to help him. He won’t, however, take cash donations to pay for supplies. Especially from those outside of India as he says the government should be responsible for patching the holes and they have the money to fix the roads.

And the government has apparently gotten the message. Or at least part of it. The Greater Hyderabad Municipal Corporate now provides some of the raw materials for patching. Currently, the city has allocated about 30 trucks in the city to pothole repairs.