In Which States Does the TSA Confiscate the Most Weapons? 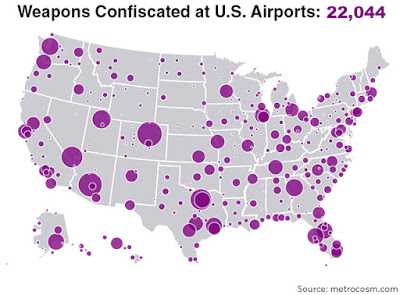 If you tried to guess which airports have the most weapons seized by the Transportation Security Administration (TSA), you would think it would be the airports that have the most traffic right? Well you would be wrong.

MarketWatch reports that over 22,000 items were seized by the Transportation Security Administration in 2015.

Denver International Airport had 1,006 items seized last year, most of them martial arts weapons. The weapon of choice at Wichita Mid-Continent Airport, is knives, while Atlanta had the most guns collected, at 172.

Even more frightening (at least to me), the majority of the seized guns were loaded!