How Would YOU Invest in the Local Transportation System? 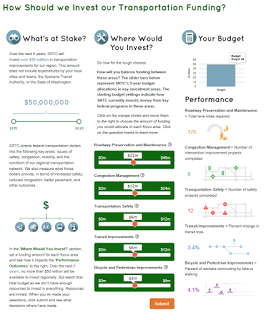 Say you had $50 million. That you HAD to spend on local transportation. And that doesn’t mean buying a new car. So how would you spend it?

Would you pay for projects that make our roadways safer? Or maybe you’d put the majority of it toward fixing our roadways that are broken down and potholed (is that really a word? Well, we’re going with it here). What about bike lanes and sidewalks? Would you spend money for more of them?

We’re trying to determine what the priorities of area residents are when it comes to transportation. To do this, we’re asking you to take our web survey.

New federal and state regulations require SRTC to create and track performance measures and targets to ensure the transportation system is developing as planned. To do this, we must first identify what measures and targets to set.
The web tool will help you understand how investments and outcomes are related and also allows you to identify priorities of the region that will help develop those targets. The tool allows users to choose an estimated level at which they would fund categories such as roadway preservation, congestion management, bicycle and pedestrian improvements, transit improvements and transportation safety.
As you allocate money to each category, graphics show just how far that amount would go. For roadway preservation, the amount of lane miles repaired changes as you change the funding for that category. For bicycle and pedestrian improvements, the percentage of people commuting by bike or walking increases or decreases as you add or subtract money.
The $50 million available for distribution on the web tool is based on the approximate amount of money projected to be invested in the local transportation system by SRTC over the next five years.  Once you have made your budgeting decisions, you can compare your results to others who have used the web tool and learn about the next steps in the performance measurements development process.