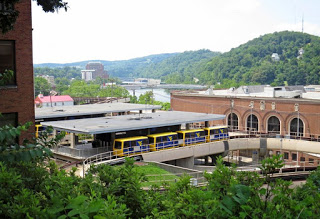 Talk about ideas that didn’t take off. NPR this week has an article on Morgantown, West Virginia’s Personal Rapid Transit (PRT) system, installed in 1975, that just never caught on and didn’t bring with it a new age of public transit, as billed.

Even so, West Virginia University, which runs the PRT system, isn’t giving up on it and is spending more than $100 million to refurbish the aging system. With PRT, riders start from a central station downtown and pay 50 cents each (free if you are a student) to get in a small car that only goes to your destination and doesn’t stop anywhere else.

Each car holds about 18 people and a sign over the cars indicates where they are headed. PRT’s advantage is that, unlike traditional transit, the car doesn’t stop at multiple stops as it heads to it’s final destination. Another advantage is that if there’s a midday lull, and the cars aren’t needed, they just sit at a station and wait, rather than running empty.

The system provides 15,000 rides on a typical day (Morgantown has a population of 30,000) — and doubles that ridership when there’s a home football game.

Sounds great right? So why hasn’t PRT caught on? For several reasons; opposition from companies that make systems for buses and light rail, questions about the reliability of the new technology, and uncertainty about PRT’s cost-effectiveness.