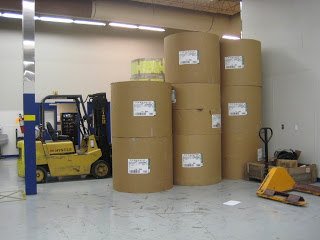 I chewed my way out of my tracking bracelet yesterday and hightailed it to the north side of town to tour the Inland Northwest Lighthouse (INL) for the Blind facility. A member of our Transportation Advisory Committee (TAC) works there and was eager to show it off, especially as the company is expanding and that will have an impact on area transportation.

INL is a manufacturing organization that makes jobs accesible to blind individuals. they produce paper trimmers, wall boards, file folders and even airplane parts for Triumph Composite. As my guide at yesterday’s tour said, “Does it make you nervous that blind people are building your plane parts?” But actually it didn’t because I got the idea the employees there pay more attention to detail than the average production worker.

In addition to providing jobs to blind people, INL teaches them other skills, such as orientation and mobility training, computer skills and braille training. As I was told, they are helping the economy in several ways; a.) they’re employing people who would be collecting disability checks otherwise b.) there is not another producer of this caliber in town so they are not in competition with another manufacturing organization or taking jobs from someone else c.) after training blind people computer and other skills, they can move on to other jobs not specifically for blind people, which opens up another job at INL for someone who can’t see.

So why do we care at SRTC? Besides the fact that an INL employee is on our TAC, because we work with social service organizations that provide transportation to people with disabilities, and we try to encourage projects that make transportation accesible for those with disabilities. INL is expected to double their workforce to 100 blind or otherwise disabled people in the next year. All those people would be at work each day around 7:30 a.m. and leave about 3 p.m. These are not folks who are driving themselves to work, so how are they going to get there? Many use paratransit and a lot ride the bus. The worry is that the bus may not be able to handle that many blind people on top of their regular clientele. And there are times when INL employees work overtime, which severely limits how they can get home as the bus runs less during later evening hours.

While those are problems that still need to be dealt with, INL is already making a positive impact on the area transportation system. The administration there is working with the City of Spokane and has gotten the traffic department to agree to put up two new Audio Pedestrian Signals around the City per year. Those signals make noises that tell blind people when it is safe to cross a road. While it would be ideal to put them all over, they are more expensive than the usual walk signals so will be installed a few at a time. Even so, that’s a step in the right direction.