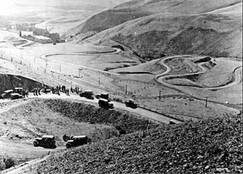 I just attended a lunch to celebrate the 110 year anniversary of the Spokane Area Good Roads Association. It was kind of a who’s who of transportation elite for our area, plus lots of elected officials such as Spokane City Mayor David Condon, Senator Andy Billig, State Representative Kevin Parker and several others.

The Good Roads Association is a group of  industry advocates and experts that believe in promoting and fostering construction, maintenance, and improvement of good roads and transportation infrastructure throughout the State of Washington.  The association:

State Transportation Secretary Lynn Peterson was supposed to be the keynote speaker at the lunch but due to an issue with a project, she was called back to the west side of the state by the governor. So Deputy Administrator Keith Metcalf stepped in and did the honors. In his speech, he mentioned talked about how things are changing in transportation; fewer young people are driving, self-driving vehicles are the way of the future, more people are using public transit, etc. But he also emphasized that all these changes still have one thing in common- roads. self-driving cars and buses still operate on roads. And bicycles and pedestrians also still use the roads. So roads will never go out of style.

He also talked extensively about the North Spokane Corridor and the need to finish it sooner rather than later.

Mayor Condon also spoke. He emphasized the amount of capital improvements the City needs done ($750 million!) and how we’re doing better through partnerships between jurisdictions and with groups like the Good Roads Association. And he mentioned that many people don’t know where they live, city or county, so the condition of our roads shouldn’t change at an invisible line that divides the jurisdictions.