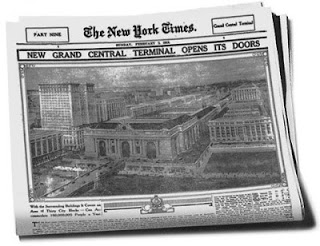 The picture to the left is the special section the New York Times ran to mark the occasion and praise the technological wonders and (at that time) modern luxuries of the terminal. The most impressive technology was the change to electric trains from the days of steam and diesel.

Because there were no fumes or steam, the new tracks could be buried in tunnels under the streets, solving problems that streets divided by street level rail yards had created.

More interesting to some though was that the station boasted a women’s hair salon, a ‘kissing gallery’ and was considered the first ‘stairless’ terminal. The New York Times has more on the terminal’s birthday, and you can even browse that original newspaper.