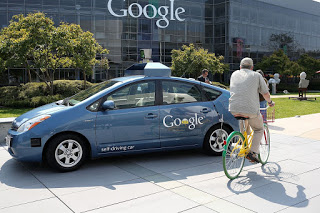 Well, Google self-driving cars are no longer blame-free. Until recently, Google cars had driven more than a million miles without causing even a fender bender. The cars had been involved in a few accidents, but hadn’t caused any.

On Valentine’s Day, that streak came to an end, according to Vox. A report from Google says the self- driving car was in the rightmost lane  approachinh an intersection when it encountered a sandbag blocking its path and stopped. The car then tried to merge into traffic to the left to avoid the sandbag. It tried to merge in front of a bus, expecting the bus to let it in. The bus kept moving and the Google car hit the side of the bus, damaging the front fender, the left front wheel, and one of the driver’s side sensors.

The bus was estimated to be moving about 15 miles per hour at the time of the crash, while the Google car was traveling 2 miles per hour. No one was injured.