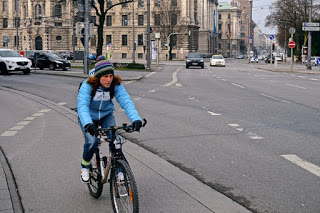 Germany is known for it’s Autobahn; the highway with no speed limits. It will probably be known for it’s bike authobahn next, a bike route that will eventually cover 62 miles between the cities of Duisburg and Hamm.
According to Citylab, the first three miles of the route was opened last month. The lanes are 13 feet wide so that faster riders can pass slower riders and the whole thing is fully separated from cars. The hope is that one day bicycle “highways” like this will connect the entire country. Munich is already planning a network like this one, which will stretch from the city center along 14 protected two-lane paths through the suburbs into the surrounding lake land. Cologne, has a smaller plan for a similar bike highway out into its western suburbs.

In populated urban areas, bike highways could become a viable commuter link, freeing up capacity on busy roads and railways.