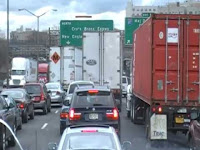 You’ve heard of transit-only lanes in some big cities. Well, Georgia is building truck-only lanes. Transport Topics, two new northbound lanes will be built on 40-miles of Interstate 75 between Macon to McDonough. They will be part of a 10-year, $10 billion transportation law that Georgia Gov. Nathan Deal signed. Georgia’s Department of Transportation says traffic volume on that segment of I-75 are projected to reach as high as 100,000 vehicles per day, including 40,000 trucks.
According to

Deal’s administration takes freight movement very seriously and hopes this will alleviate traffic issues in an area that has many warehouses. Not only will it help get goods to and from market more efficiently, but the truck-only lanes will take trucks out of private vehicle traffic, which will mean less backups and safer driving. According to American Trucking Associations, the only other truck-only lanes are on connector roads from the ports of Miami and Tampa.