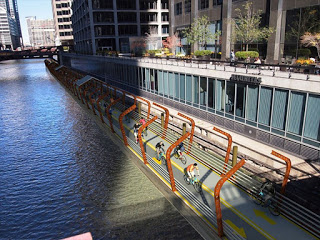 Chicago is getting crazy. But in a good way.

A group of Chicago architects and designers are proposing a series of floating bike paths that would connect parts of the city’s disjointed bike infrastructure and help revitalize the underutilized Chicago River.

According to Next City, the plan — dubbed RiverRide — would feature paths on 82-foot-long, 12-foot-wide, steel-reinforced concrete pontoon segments that would be anchored into the riverbed with pilings and have precipitation-activated awnings for rainy weather, and solar-powered lighting for night.

The project is estimated to cost $5 million to $10 million per mile. The proposal is still being considered, but if approved by transportation officials, could be implemented as soon as summer 2019.