Famous Authors and Their Bikes; A Photo Series 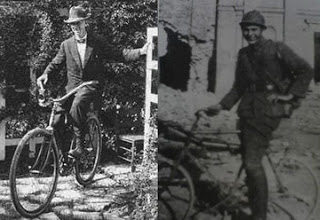 You’ve heard about Ernest Hemingway and his  boat, but did you know he also had a love of bicycling? That’s him in the picture; in peacetime and as part of his war duties.

These pictures are part of a photo series of famous authors and their bicycles that I found a link to on  the DownToEarthNWBlog.

Apparently many authoris, from Tolstoy to Henry Miller and Sylvia Plath used bicycling for transportation. Check it out, there some pretty cool pictures, especially of the early tandems. And what some of these writers wore to ride their bikes is kind of crazy too.