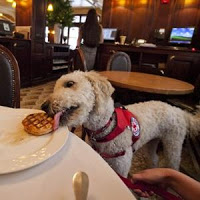 I was in Home Depot the other day when a small dog being pushed in a stroller jumped out to
confront another dog being walked on a leash. In a store. What the…? I get it that some people need service animals but all of these animals we are seeing in businesses these days are not service animals.

This article in the Spokesman-Review today talks about how these untrained animals that are being passed off as service animals can actually harm real service animals. It references problems being caused on Spokane Transit buses by people bringing their dogs aboard, claiming that they need them to function. I’ve talked to a couple bus drivers in the past who have said it’s a definite issue. One told me there were two dogs on his bus one time that got in a fight and another told me he has seen people bring all kinds of animals on his bus. That driver told me he drew the line at a very large “service” snake because not only was it upsetting to other riders, but the driver himself was uncomfortable with it on his bus.