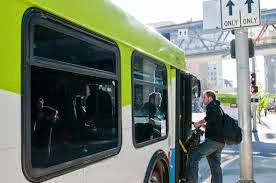 Spokane Transit Authority directors vote tomorrow (Thursday) on a plan aimed at boosting
revenue and service throughout Spokane County by 30 percent and launching a new central city line that would shuttle passengers from Browne’s Addition to Spokane Community College.

Most of the funding to implement it would come from federal and state grants.To help cover all of the projected $160 million though, the local sales tax would be raised 0.3 percent, or 3 cents per $10 purchase.

An editorial in today’s Spokesman-Review says the plan is too ambitious and a scaled-down plan and smaller tax increase should be undertaken first. While the piece credits much of the plan for being needed additions to the transit system, it names the downtown STA Plaza as the plans’ weakest link and says, “Some (people), unfortunately, also pursue a life around the Plaza that has little or nothing to do with transportation.”

You can read the entire editorial here.