Driverless Bus On the Road in the Netherlands 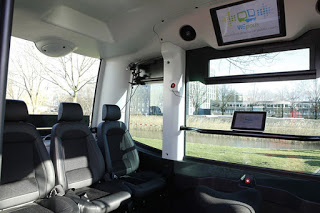 Forget driverless cars- the Netherlands (as usual) is way ahead of us. Last week, an electric,
driverless bus called a WEpod was launched there on a trial basis on the campus of Wageningen University, according to the Christian Science Monitor.

The bus doesn’t even have a steering wheel or pedals that would allow a human driver to take control, unlike driverless cars in the U.S. The WEpods, which only travel at a top speed of 25 miles per hour,  only carry six people but will be used as regular public transit eventually. In April, driverlesss semi-trucks are supposed to be rolled out in the Netherlands as well.