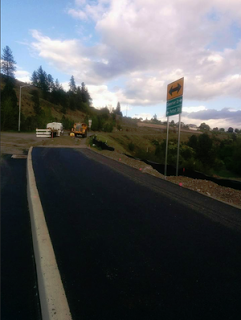 Don’t worry Bloomsday runners, you will still “get” to run up Doomsday Hill this year, despite a construction project underway on Pettet Drive.

According to the Spokesman-Review, construction on a new trail along Pettet has just started and won’t interfere with Sunday’s race. However, the street will be closed in September when Spokefest happens, so a detour has already been planned for the biking event.

The project will reconstruct the roadway and narrow vehicle lanes by a couple feet each in order to make room for a new section of the Centennial Trail on the river-facing side of the road. Before all that happens though, a tank for storing runoff will be buried under the roadway in the hillside to keep it from overflowing into the river before being treated.