Does The Growing Trend of Living Alone Lead to More Sustainable Cities? 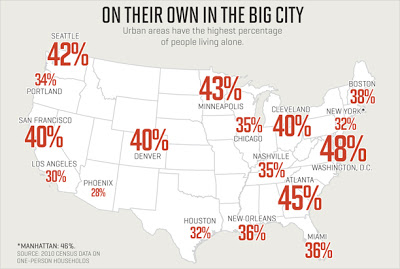 Overall, Census data shows that housesholds are getting smaller and the population is getting older. The median age of our population is now 36.8 and the average household size is 2.44 persons.

This shift isn’t just happening in the Spokane area though. In 1950, single person households accounted for only about 9% of all U.S. households. Today that figure is right around 28%, which is in line with Spokane’s numbers. So why should we care or what impact will this change have?

For one thing, people living alone seem to prefer to live in central cities, which some analysts say leads to a more sustainable lifestyle. Single people are more likely to commute using transit as well.
More implications are included in this Atlantic Cities article.

Locally we are examining the potential impacts in the Horizon 2040 plan. The link is above if you’d like to take a look. One thing we’ve recognized about people living alone is that many of them are seniors, and with the baby boomers aging quickly, we need to find ways to meet their transportation needs after they can no longer drive themselves.