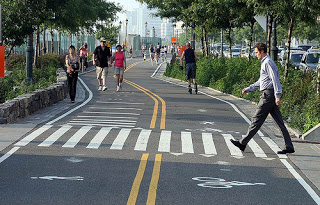 Do you prefer walking or driving? Your answer may suggest something about your education level, according to results from a study just released by Smart Growth America. The BBC reports that study results say metropolitan areas in the United States that were found to be more pedestrian-friendly also often had higher levels of Gross Domestic Product — and their citizens were better educated.

The Smart Growth America study looked at the 30 biggest metro zones in the US, and ranked them by how much office, retail, and residential area was conducive to walking.

Christopher Leinberger, study author and professor at the George Washington University School of Business, says that walkable urban places “have a much higher propensity to have highly educated people — about one third higher than drivable metro areas, like Orlando, Tampa, and Phoenix.”

The top three cities in the study with the highest percentages of office, retail, and residential spots in walkable areas — New York, Washington, and Boston — had a lot of citizens age 25 and up who hold a least a bachelor’s degree. Washington had the most of those citizens in the entire study (51%), and Boston had third most (42%).

To date, there’s not enough data to definitively say why these urban areas are filled with educated people but the article has some interesting ideas. Click the “BBC” link above to read the full article.