Division Street Bridge Collapsed 100 Years Ago. How Are Our Bridges Today? 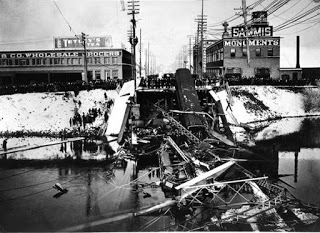 It was 100 years ago today when one of the deadliest accidents in Spokane history occurred. The Division Street Bridge collapsed into the icy Spokane River just after 6 a.m.when two streetcars were crossing it, dumping them into the water.

Five people died and about 14 others seriously injured.

An investigation showed that the bridge might have been damaged by debris from an earlier flood. However, the main cause of the collapse was declared to be metal fatigue.

A new concrete bridge was completed in 1917.

Sounds scary right? It’s not as bad as it sounds but also, why don’t we just get them fixed? The same answer as to every other transportation question- there’s just not enough money to go around. Bridges are very expensive to fix. In the coming years though, as our infrastructure continues to age, I think we will see a lot more bridges under construction as the alternative is to have them fall down.