Data Says Walking to School is on the Rise 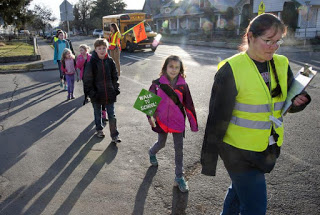 New research from the
National Center for Safe Routes to School shows that nationwide, walking to
and from school increased from less than 14 percent to more than 17 percent of
all trips between the 2007-08 school year and 2014.

The full report on the study can be found here.

While not nationally representative of all American schools, the travel patterns documented by the study’s 6,500
schools show an upward trend in walking.

In 1969, 48 percent of students in
grades K through eight walked or rode their bikes to school. That’s compared to only 13 percent
in 2009. The study “Trends in Walking and Bicycling to School from 2007 to
2014” was compiled from 720,000 parent surveys throughout the United States. Researchers analyzed school travel patterns to
learn more about school and household factors that may influence families’
school travel mode choices.