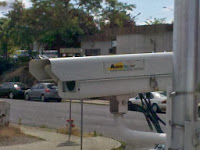 Spokane’s controversial red light cameras will be around for a while. After five years in use in the City of Spokane, the City Council Monday night voted to extend the program for another five years.

The cameras are set up at major intersections throughout the city and take a picture of anyone who runs a red light. Since the program began five years ago, nearly 50,000 citations have been issued with a net revenue of nearly $2 million dollars, according to the Spokane Police Department. A ticket from one of the cameras will run you $124.