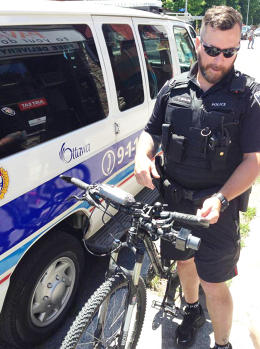 We hear all the time about bicyclists who had close calls with cars who passed them too closely, even though the law in many states requires drivers to give riders at least three feet of space. Unfortunately, that law is hard to enforce and hard to prove unless a rider is actually hit by a car.

As a result, some cities are starting to use the biking equivalent of a radar gun. It works by mounting a small gadget on the handlebars on a police bike that sends out sonar to measure the exact distance to a passing car. If someone veers too closely, the cop can ticket them.

This technology, called C3FT, is being used in 11 cities, including Minneapolis, Houston, and Las Vegas.