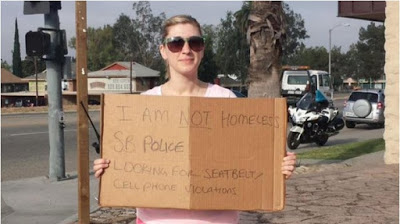 Autoblog reports that four plainclothes police officers stood on highway off-ramps and street corners holding cardboard signs. The signs didn’t ask for donations though, they read “I am NOT homeless. SB Police looking for seatbelt/cellphone violations.”

They then walked up to the windows of many vehicles unnoticed by drivers that were either talking or texting on their cellphones. One detective said he made 14 stops and only one woman said she read the sign, but by that point it was too late.

In all, the officers pulled over 53 cars and handed out 50 citations, 33 of which were for cellphone use while driving, in just three hours.