Construction Starts on Phase 2 of MLK Way In May 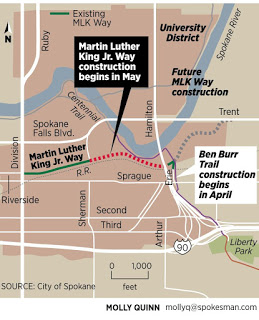 Construction on phase 2 of Martin Luther King Jr. Way starts in May, according to the Spokesman-Review. The project will stretch from Sherman Avenue (where the University District bicycle and pedestrian bridge will eventually be located) to Erie Street, near Brown Building Materials. The project is expected to cost $2 million.

The first phase of the project, basically an extension of Riverside Avenue, opened in 2012 and cost $3.8 million. When complete, the entire street will run from Division to a roundabout at the intersection of Trent and Perry. So far, there is no firm date for completion.

, but city officials said there is not yet a firm completion date. When this year’s phase is complete, it will add a new connection between downtown Spokane and the East Central neighborhood, passing through the heart of the University District.

In anticipation of the extension, the city spent $410,000 last year to pave Erie Street from First Avenue to the future MLK Way.

Aside from the anticipated construction of the bike-pedestrian bridge spanning the railroad tracks, the city will pave and extend the Ben Burr Trail that connects Liberty and Underhill parks. The $1.2 million project will begin in April. The multiuse path will start at the south side of Underhill Park, go underneath Interstate 90 and Sprague Avenue, and follow Erie to the river’s edge, where it will run west to meet with the Centennial Trail.