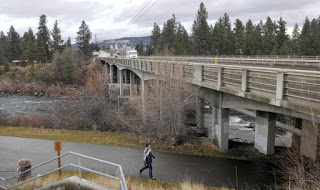 The Sullivan Bridge Replacement Project has created a problem for the Centennial Trail. According to the Spokesman-Review, to provide enough clearance near the abutments, part of the Trail will have to be relocated closer to the river.

Spokane Valley engineer Steve Worley said the original plan was to lower the trail to get enough headroom, but underground utility cables located there would cost too much to replace.

Moving the trail will require construction of a new retaining wall above the high-water mark so it could cost approximately a couple hundred thousand dollars to relocate the trail, according to very rough engineer’s estimates.

Money is available to do this though, as a $500,000 contingency was built into the $15 million cost of the project in case something like this came up. The consultant for the bridge project is responsible for the mistake and will cover part of the added expense.

Because this will permanently move the Centennial Trail closer to the river, a public hearing is required by environmental regulations. It will be held at next Tuesday night’s Spokane Valley City Council meeting.

If the changes can be made before the end of paving season (late November usually), Worley says the bridge project will remain on schedule to be complete by September 2016.