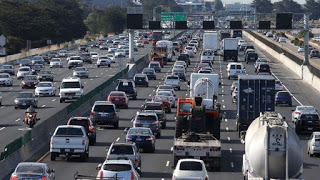 Wow, it’s like Christmas is coming early this year! We may have a new five-year, $305 billion highway bill very soon.

Both the Senate and the House yesterday approved the bill, which now moves on to President Obama to sign.

The Wall Street Journal says the bill would provide money for roads and rail projects, renew the Export-Import Bank, and even restore a crop-insurance subsidy. Ferry systems also stand to receive funding and auto companies face safety defect fines under the bill.

The majority of funding for the bill will be provided by gas tax revenue. About $207.4 billion would be devoted to highway projects, $48.7 billion to public transit, about $8 billion for Amtrak and almost $1 billion to safety programs.

If signed by Obama, the measure will also establish the first-ever grant program guaranteeing financing for large-scale freight project.