Community Doesn’t Like Bike Lanes- Because of How They Look 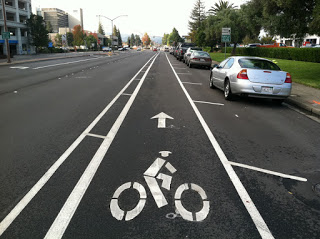 So obviously bicycling isn’t for everyone. But apparently bike lanes aren’t either. Whether you use according to Streetsblog USA– they don’t like the lanes because of how they look. That’s right, folks at a Coronado beach public meeting called proposed bike lanes “visual pollution” and some even implied they detract from property values in the area. But wait, there’s more! One attendee compared bike lanes to taking his/her daughters to a tattoo parlor and having their entire bodies tattooed. Okay, I don’t get that but it’s funny so there’s that. Here’s more if you want to read the entire article.
them or not. When I’m out speaking to people in the community, I’ve heard a variety of reasons that people don’t like them. Some say they’re not safe because they give bicyclists a false sense of security. I’ve had other people tell me that they’re confusing to drivers when they come to intersections. And one woman even told me she doesn’t like driving next to a bike lane because it makes her nervous to pass people on bicycles. Okay, comments noted. But some folks in San Diego have an entirely different set of reasons they don’t want bike lanes in their community. Get this-