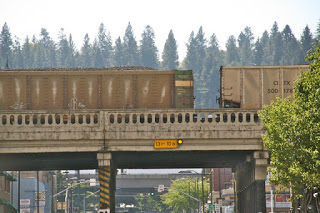 Spokane’s City Council last night voted 6-0 to ask voters if they want to fine railroads for running
coal and oil trains through the city.

According to the Spokesman-Review, the November ballot initiative would impose a $261 fine for each rail car of crude oil and uncovered coal that passes through downtown.

Opponents say passing the ordinance would snarl the city in unnecessary lawsuits but supporters believe it will protect the aquifer from coal dust or oil that could seep into the water supply in the event of a spill.

Is this move even legal? The Spokesman-Review reports that the Federal Railway Safety Act, first passed by Congress in 1970, permits local governments to adopt rules to “eliminate or reduce an essentially local safety or security hazard” if the Department of Transportation has not taken action.

City Councilmember Breean Beggs, also an attorney, said Spokane’s unique aquifer would likely withstand a legal challenge as an “essentially local” hazard, though the courts have struck down local regulations pertaining to rivers because they are more prevalent near railroad tracks than aquifers.