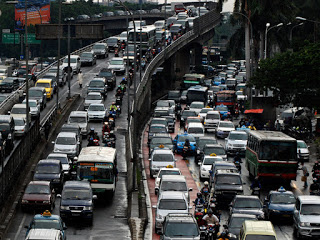 Live near a freeway or busy street? You may want to move. Or prepare to die young. Living close to noisy road traffic over a long period of time could reduce life expectancy, according to new research reported by Newsweek today.

Findings of the study, done by the London School of Hygiene and Tropical Medicine (huh?) suggest a link between long-term exposure to road traffic noise and deaths, as well as a greater risk of stroke, particularly in the elderly. For the research, millions of London residents were analyzed between 2003 and 2010, and road noise assessed in areas around the capital during the day and night. This data was then compared to deaths and hospital admissions in each area.

What they discovered is that deaths were 4% more common among adults and the elderly in areas with daytime road traffic noise of more than 60 decibels (dB) compared to areas with less than 55dB.

The deaths are likely connected to cardiovascular disease, possibly due to increased blood pressure, sleep problems and stress as a result from high traffic noise levels.

Adults living in areas with the noisiest daytime traffic (more than 60dB) were 5% more likely to be admitted to the hospital for stroke compared to those who lived in quieter areas (less than 55dB). This number increased 9% in the elderly. Night time noise (55-60 dB) from road traffic was also associated with a 5% increased stroke risk, but only in the elderly.

This is the first study is the first in the UK to show a link with deaths and strokes, according to lead author Dr. Jaana Halonen.