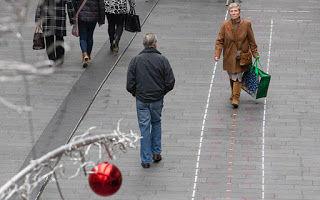 In large cities it happens fairly often. You’re in hurry to make an appointment, get to work etc., but you get stuck behind slow walkers or someone barely moving because they’re checking their phone. No longer a problem in Britain, where the first pedestrian “fast lane” was striped this week.
The Telegraph reports that retailer Argos has painted new markings on the pavement outside its Liverpool store after research showed that almost half the nation found the slow pace of major shopping areas (known as “high streets”) to be their biggest pet peeve.
In total, 28.8 million Britons said they would like a pavement fast lane installed in their local high street to ensure less time is spent dodging the masses.