Boot-and-Tow Program Appears to Be Working 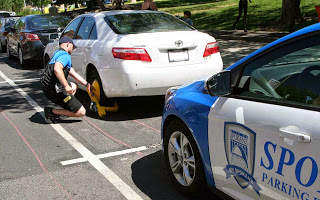 In August of 2015, it will be one year since the City of Spokane began its Boot-and-Tow program to City’s blog.
help with collection of unpaid parking tickets. Since then, the number of outstanding tickets and people with four or more unpaid parking citations in collections has dropped, according to the

Here are the numbers, up until last week:

I did some basic math on those numbers and that averages out to almost nine tickets per person!

If a car belonging to someone who has not paid ALL their outstanding parking citations is booted, the vehicle’s owner has two business days to pay the tickets and an additional $50 boot-removal fee. After the two days, the vehicle will be towed. The only way to get the car back at that point is to pay ALL citations and collection fees, and ALL fees that were added in the process of being booted and towed.