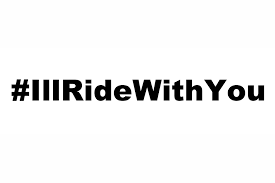 Some Australian social-media users have sent a message of solidarity to Muslims in the wake of the Sydney cafe
siege, offering to accompany anyone who felt intimidated on public transit.

Hostages were held inside a cafe yesterday by a gunman who had a flag bearing an Islamic declaration of faith that has been used in jihadi imagery. That prompted speculation that the siege could ignite retaliatory violence against Muslims.

The Twitter hashtag #IllRideWithYou had been used more than 90,000 times by early today. Sydney resident Rachael Jacobs wrote on Facebook that she had seen a woman on the train remove her headscarf and offered to walk with her. That spurred a Twitter campaign in which users offered to travel on public transit with those in Islamic dress who felt insecure. Mass Transit has the story on this movement and show of solidarity.