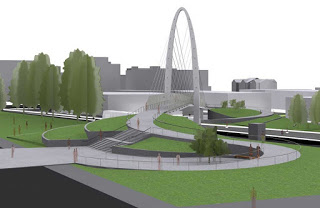 An opinion piece in today’s Spokesman-Review lauds two projects included in the state transportation budget for the next biennium: the University District Gateway Bridge, which would connect the U-district campus to East Sprague, and a central city trolley line through the core of the city.

Writer Shawn Vestal says these investments will encourage neighborhood-level revival in Spokane – based on providing a transportation alternative to driving.

The bridge and trolley line are on a  list of items to be funded by the transportation package. The bridge project would receive $8.8 million, in addition to city money and other funding.

The central city line project would receive $15 million, which would help with matching funds to use when applying for federal funds, as the project total is $72 million.

Vestal points out that several projects completed lately de-emphasize cars, including development in the Perry District, Kendall Yards, and work on Monroe between 8th and 14th. He also says the new pedestrian bridge between the U-District and East Sprague will help the next part of the city targeted for revival- East Sprague.

Anyway, it’s an interesting piece that you may want to check out at the link above.