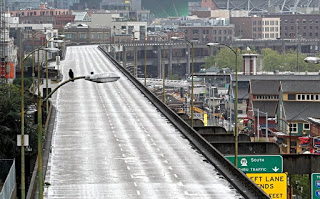 Seattle commuters are rejoicing after the Alaskan Way Viaduct re-opened ahead of schedule.

The Washington State Department of Transportation reports that drilling under the viaduct made good progress, and as a result, the viaduct opened Sunday at about 7:30 p.m.- five days earlier than planned.

Officials initially estimated the viaduct would be closed for two weeks to dig the tunnel that will eventually replace the elevated viaduct.

The roadway was closed April 29, and traffic that typically used the highway squeezed onto surface streets and Interstate 5, causing major delays and lead to an increase in traffic collisions.