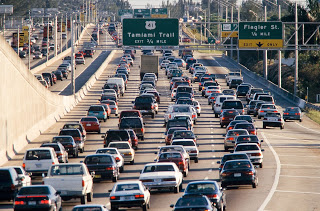 A couple years ago, everyone in transportation was reporting that driving was down. People were finding other ways to get around- riding their bikes, the bus, whatever. Then we heard that people were getting back behind the wheel. And today there is news from the U.S. Department of Transportation, on their Fast Lane blog, that 2015 was a record year for vehicle miles traveled.

According to USDOT numbers, U.S. drivers ran up almost three trillion (yes with a ‘t’) vehicle miles traveled last year. Each of the first 11 months of 2015 showed an increase of between 2.5 and 4.9 percent from the same month in 2014. Data isn’t in from December yet. Even so, those numbers make 2015 the most heavily traveled year in history.

That doesn’t necessarily mean that individuals are driving more miles. The population has grown, meaning more people are driving, and truck shipments have increased, putting more large trucks on the road.

This isn’t a record that those of us in the transportation industry are celebrating. Each of those miles means a lot of wear and tear on our roadways, increases greenhouse gas emissions, and increases traffic congestion.