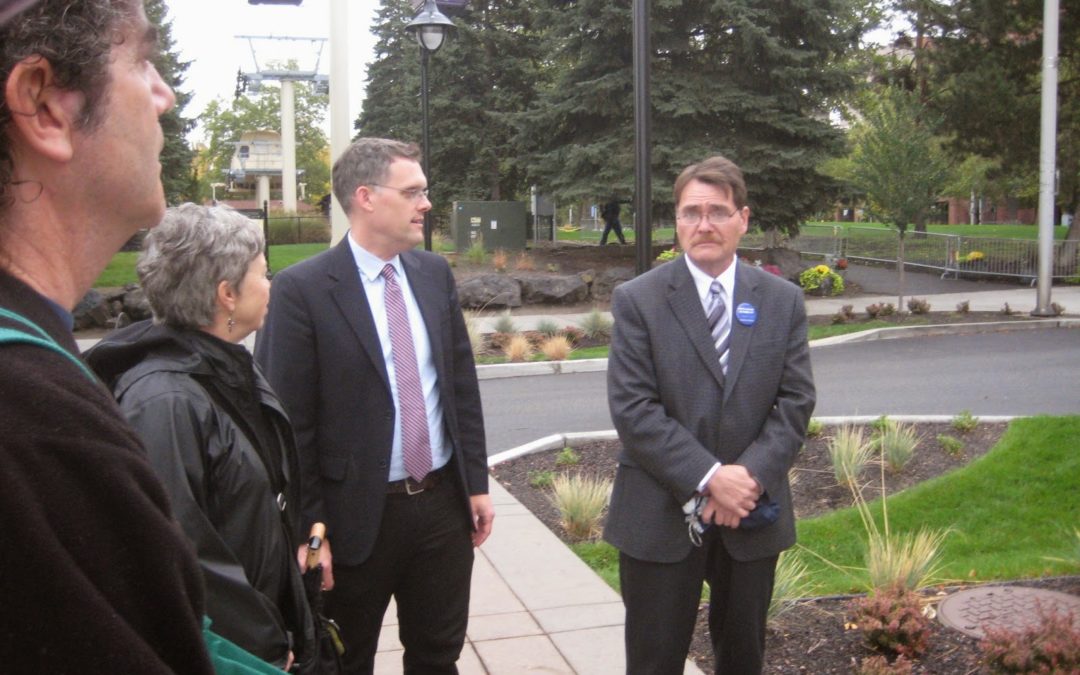 I walk or ride the bus all over downtown Spokane and like to think I’ve seen every nook and cranny of the area. But today I saw it from a different perspective. I took part in National White Cane Day, celebrated each year on October 15, to highlight the significance of the white cane and its role in helping people who are blind achieve independence.

This year they did a guided walk through downtown for officials and planners from the City of Spokane and SRTC. It wasn’t just an everyday walk though. We wore vision loss simulators for part of it to experience what it’s like trying to navigate without the benefit of sight and we stopped at several locations in the downtown area to talk about challenges the infrastructure presents to people with vision loss or even those with other disabilities and the elderly.

We also talked about some of the pedestrian safety improvements the City of Spokane has implemented in recent years. So here’s some of my thoughts after completing this exercise and more info on White Cane Day. 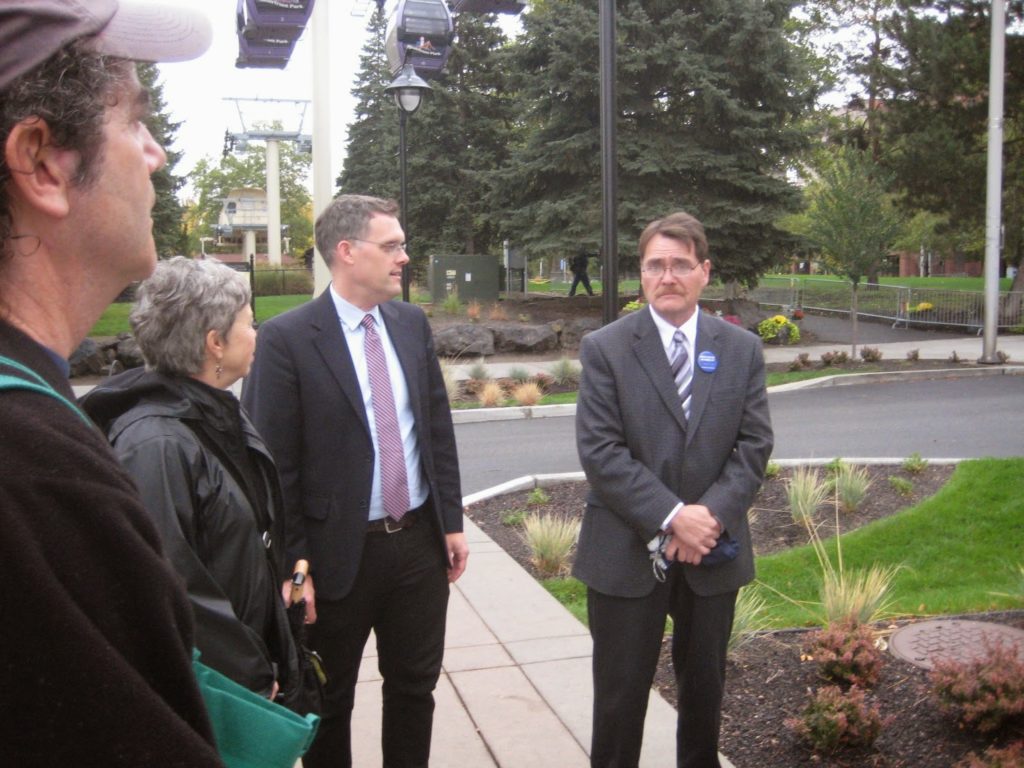 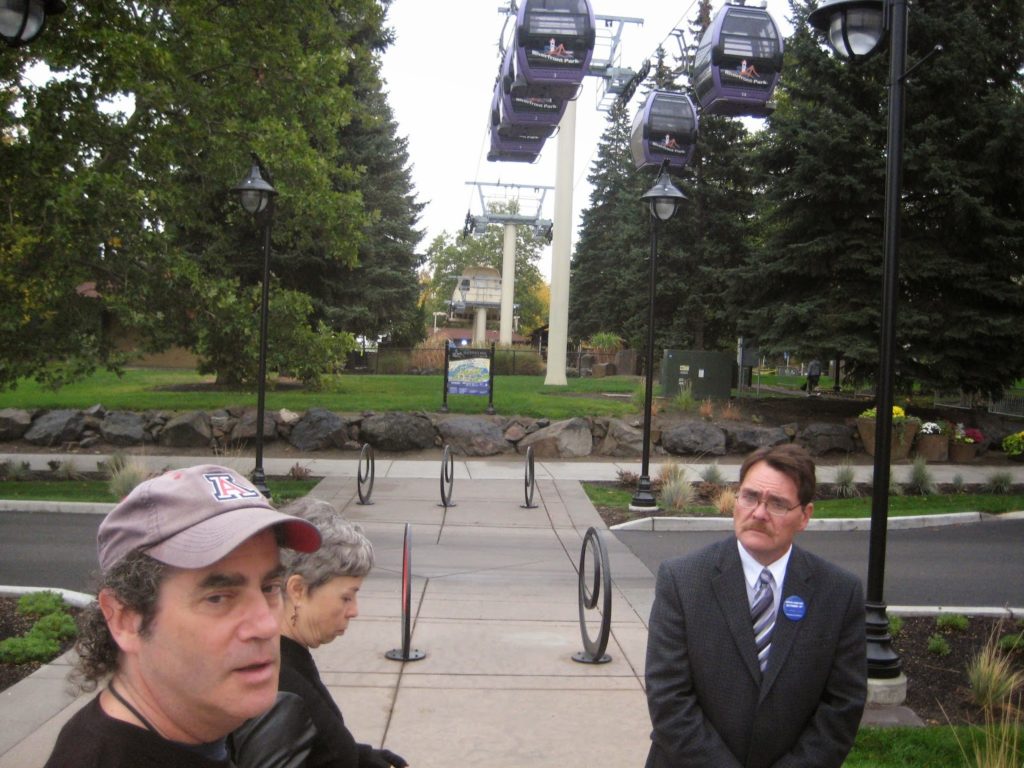 This crosswalk is attractive and innovative but notice how there’s no curb and no delineation between where the sidewalk stops and the road starts? That causes a problem for visually impaired people. There is no change in “texture” between the sidewalk and the road to alert them that they may be walking into a roadway.

Spokane City Councilmember Jon Snyder caught up to our group as he was heading to City Hall and stayed long enough to find out what we were doing. He had another appointment so couldn’t take part but put on a “White Cane Day” button before leaving. 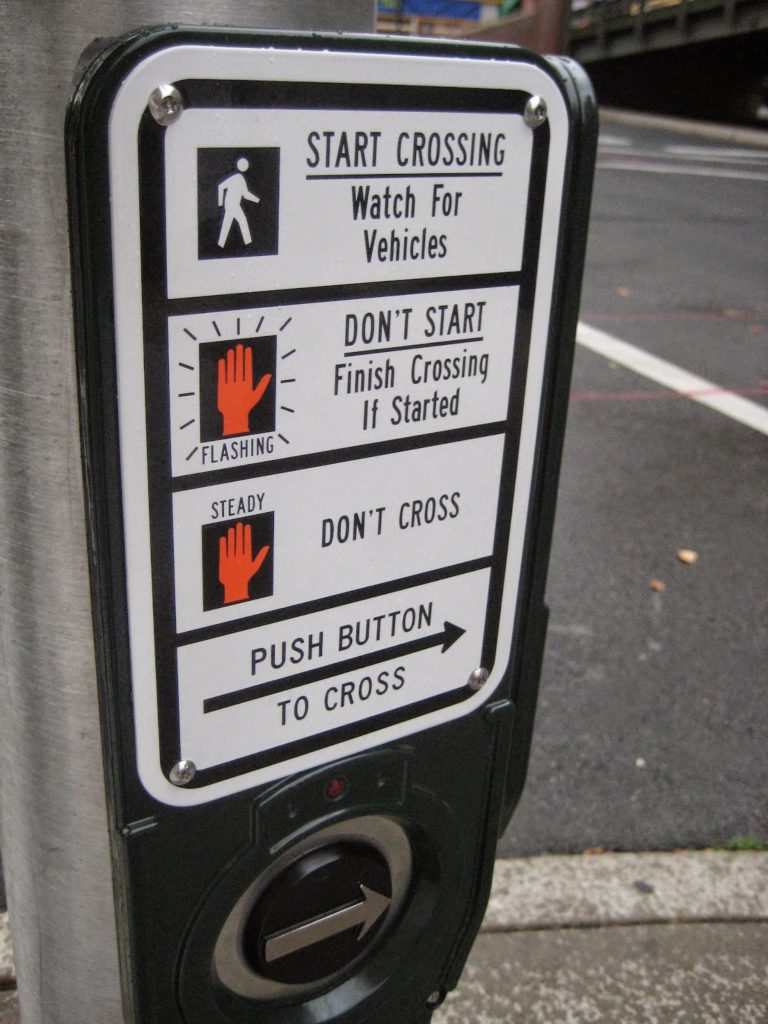 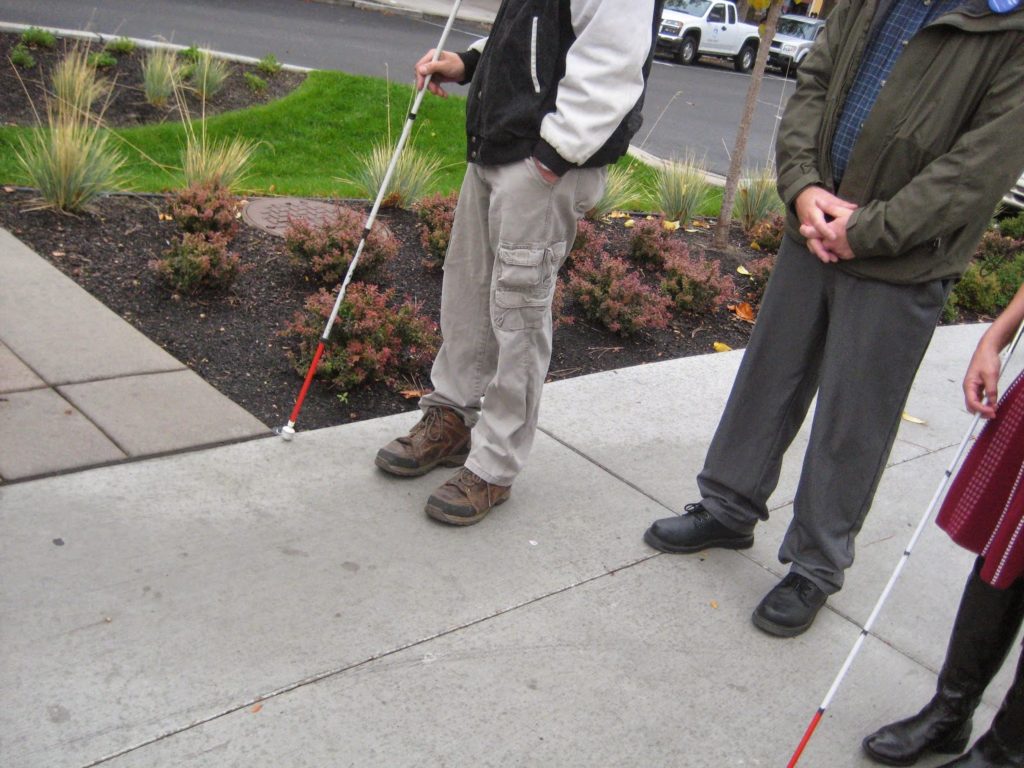 Planters and pronounced edges like the one to the left are good for visually impaired and blind people. This gentleman could feel with his cane that he would go off the edge if he took a step to the right as the surface was no longer rigid.

These audible crossing signals are replacing the old style ones at select intersections around the City of Spokane as money is available. They not only verbally tell you when to cross the road and emit a sound to let people know where the crossing is, but there is a raised arrow on the button you push to alert it that you want to walk that points which direction the street crossing is. 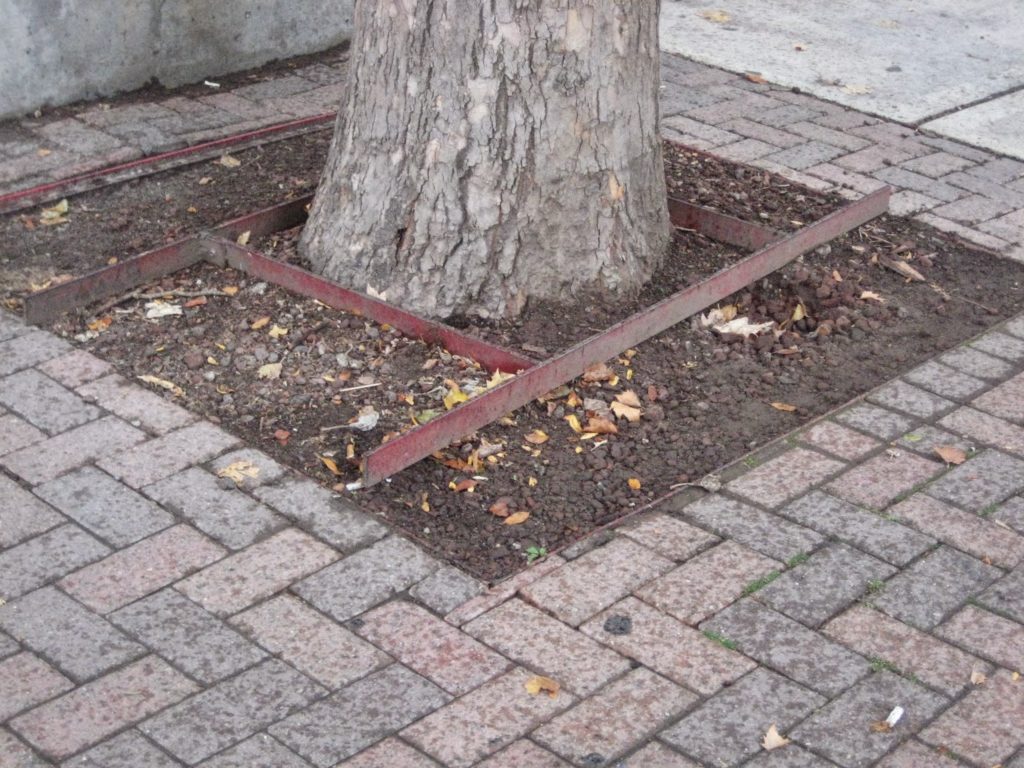 Trees are great. Everyone on the tour today agreed with that. But see that metal brace around this one? That’s a tripping hazard for a blind person. Many trees have grates over the dirt surrounding them, which visually impaired people appreciate because they can discern the difference in texture with their canes and know an obstruction is ahead. 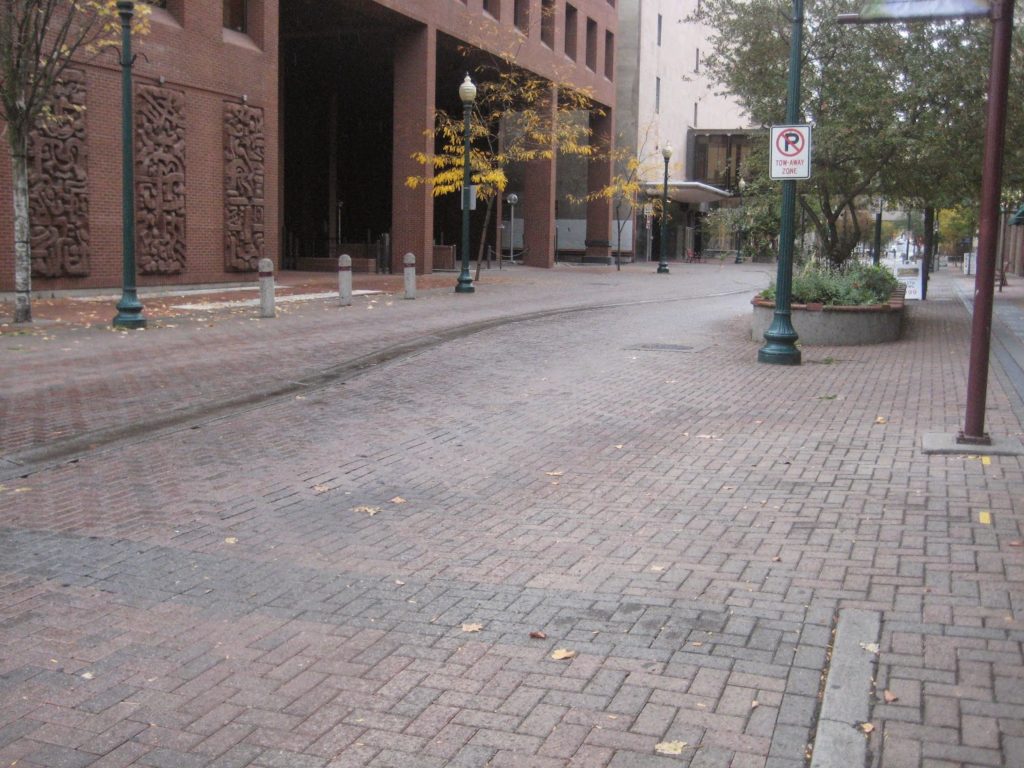 Uh oh. Trouble ahead! This is post street. It’s awesome that we have a pedestrian plaza but vehicles, especially buses, still come through here. Once again, there is no delineation between the area to walk and where vehicles drive. Also, there are posts and planters in the walkway that were hard for me personally to navigate around when wearing a vision loss simulator. 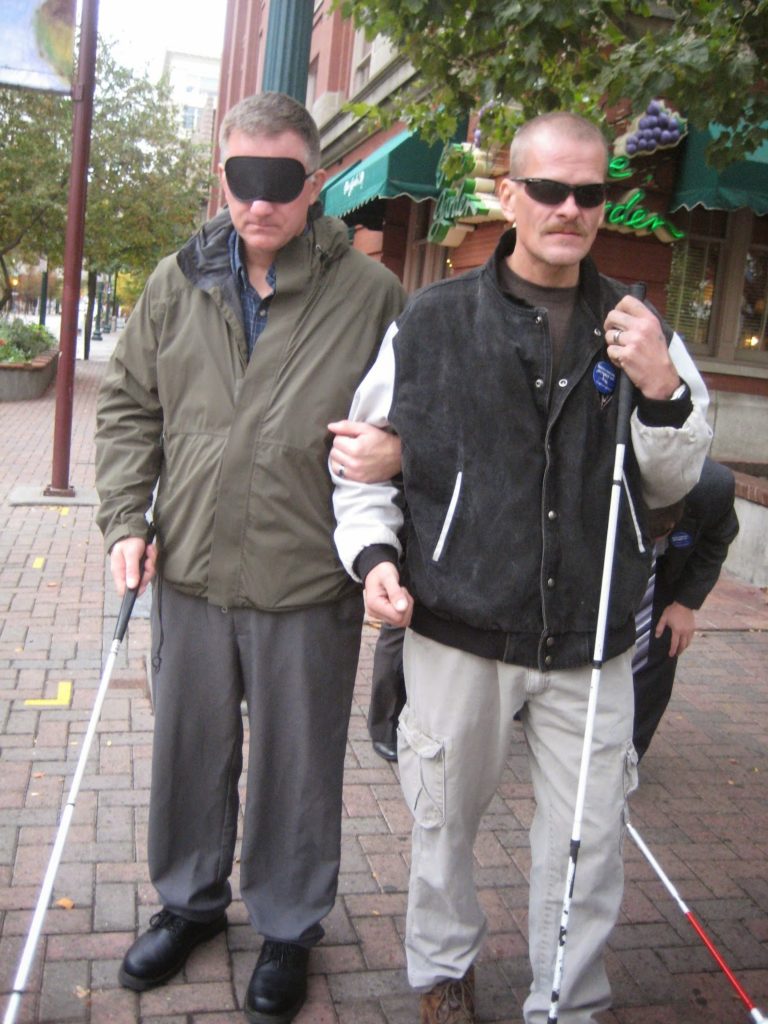 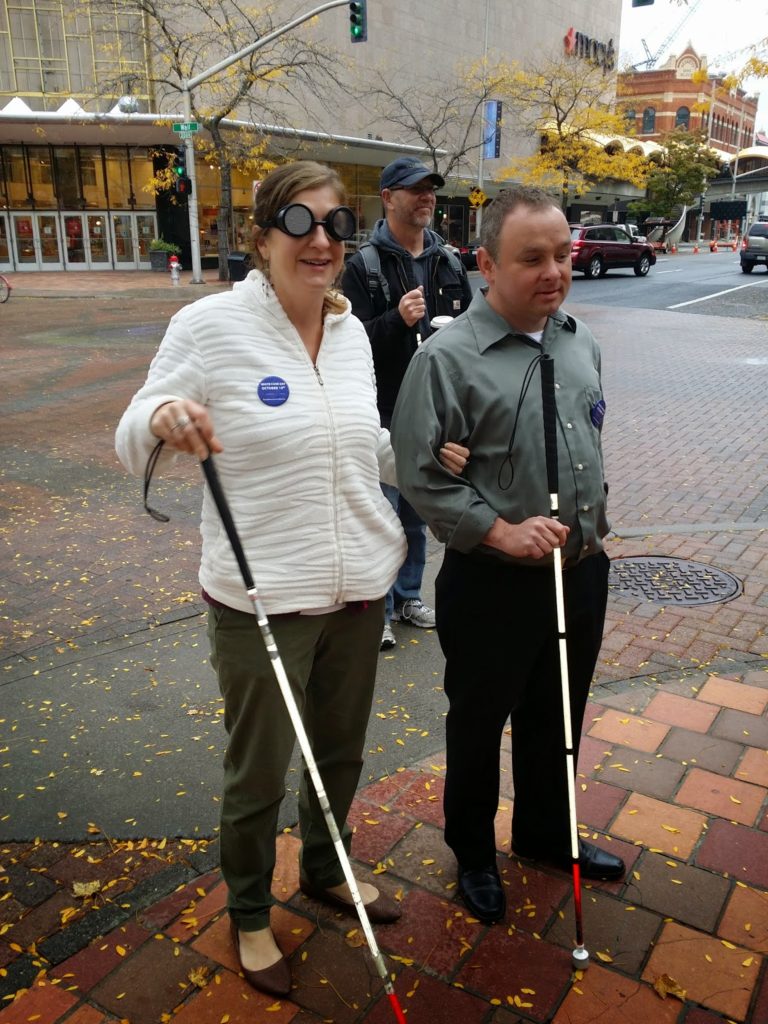 This is me to the right, also wearing a vision loss simulator. That’s Shawn guiding me. He’s on our Transportation Advisory Committee and set this whole thing up. I serve as a sighted guide for Shawn often when he comes to our office. He did a lot better job guiding me today, even while being blind, than I ever do for him, even though I can see. 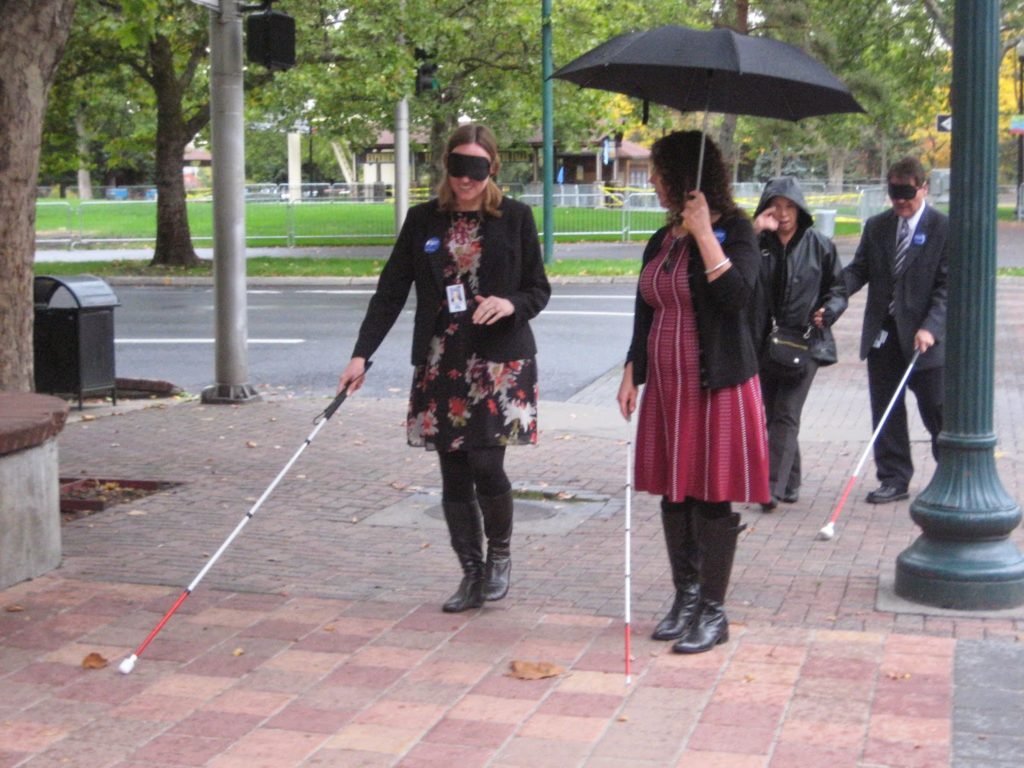 This is Kathleen, a planner for the City of Spokane and to the right is Spokane City Councilmember Mike Fagan. 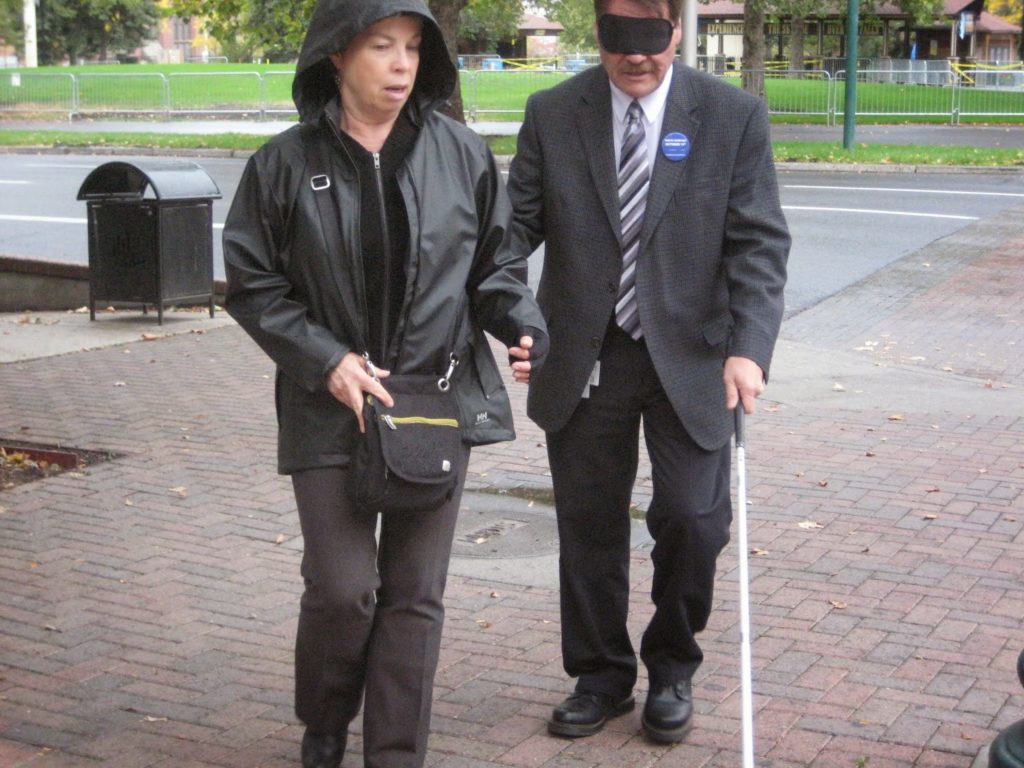 One thing that was demonstrated to us sighted folks over and over is that texture makes a huge difference in helping a visually impaired person find their way. These raised bumps at a crosswalk ramp let people know they are approaching an intersection. 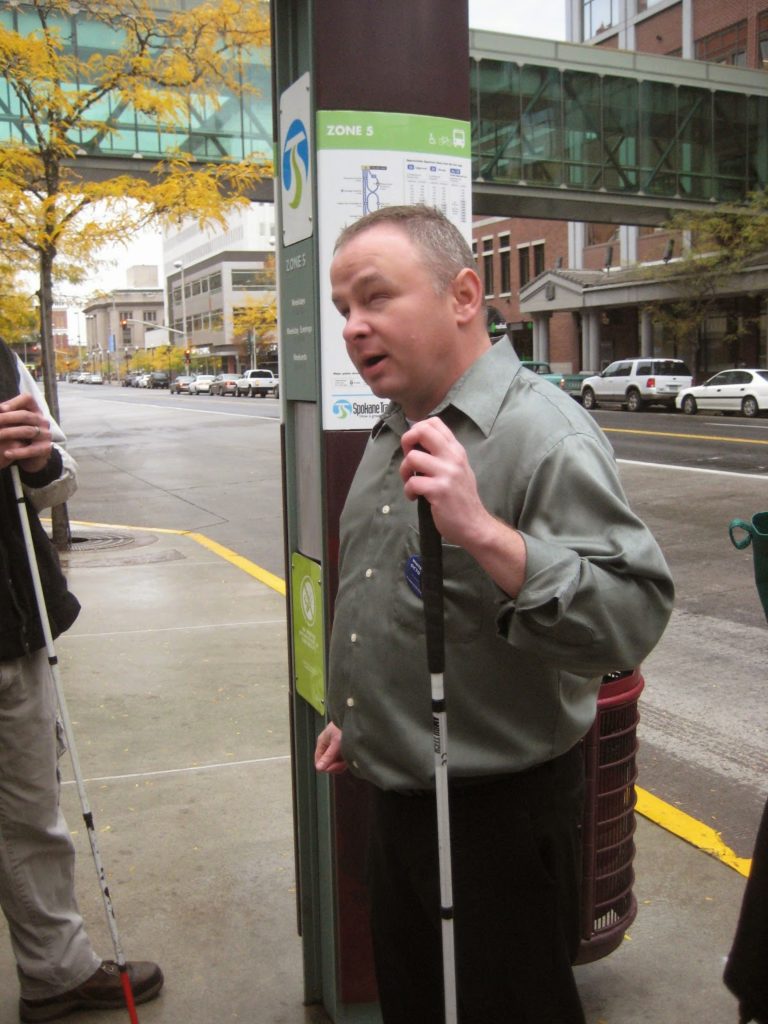 This is Shawn again. He demonstrated how, to figure out what zone he’s at to catch his bus at the Plaza, he has to walk very close to the road as the curb is the only really good ledge available to guide him. Because buses come close to the curb and the end goes over the sidewalk when pulling out sometimes, this is an extremely unsafe practice. Some kind of wayfinding measures are needed at the STA Plaza.

And my final takeaway from White Cane Day? That these visually impaired and blind folks we worked with today are a lot stronger and braver than me. I would be picked off the first time I tried to cross the street.