What Are You Willing To Pay For Better Roads? 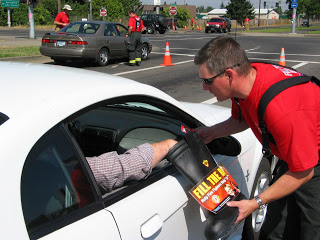 There’s been a huge focus on transportation lately, with a large number of articles in local media. With a serious lack of funds for transportation improvements, the proposed Transportation Benefit District (TBD) has been of particular interest.

The TBD would be a vehicle registration fee of between $20 and $40 every time you register your car. City councils could implement up to a $20 fee without voter approval, but if they want to charge more, it would be up to voters to approve.

Under state law, at least nine of the 14 governments within Spokane County must support a TBD, and they must represent at least 75% of the county population to get the TBD passed. The money raised would go to maintain our current streets and build new transportation facilities. Each jurisdiction would get back 70% of the money collected within their boundaries to use however they wish, as long as it’s on transportation projects. The other 30% would be pooled and used for larger projects of ‘regional significance’, such as the North Spokane Corridor.

So all this casting around for new sources of funding got me thinking; what are some new ways to raise money for transportation-related projects? Any ideas?

I was sitting in traffic in Coeur d’Alene a couple weeks ago when the fire department was doing their ‘fill the boot’ campaign for Jerry’s Kids. I only had a handful of change to contribute, but I noticed a large number of drivers sticking tens and twenties out their windows. What if we had attractive transportation planners and engineers stand in traffic and try to collect money? My suspicion is that we would have at least one injury and several engineers wander off. So do you have a better idea?