It’s ‘Visioning Day.’ As I type, I am sitting in the first roundtable meeting of the day for the Transportation Vision Project. This one focuses on Real Estate/Construction/Development and there is a lot of good discussion from the folks attending. One gentleman right now is sharing his experiences from the time he spent living in Chicago and pretty much had to use public transit or you wasn’t guaranteed to make it to his office each day. Another man who has spent time in D.C. pointed out how little ‘downtown areas’ popped up around each rail stop there, allowing people not to have to travel far to reach businesses and services.

There are two other roundtable meetings coming up today too; freight and bicycle/pedestrian issues.

Last night was the public workshop for the project. I want to thank everyone who came out for that. We had great attendance and representatives from all demographics. I was especially impressed with the older folks who attended. They were passionate about the topic and had tons of good input and suggestions based on their many years of experience here and in other cities. One gentleman said he’s been here since the 1930s and he said our roads used to be better during the depression than they are now! 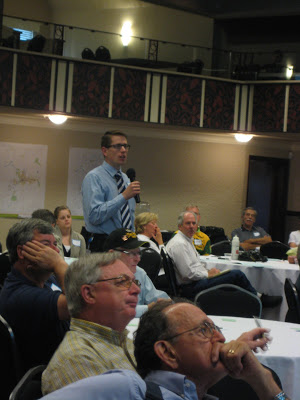 The other thing I was impressed with was how open everyone was to listening to other’s opinions. Everyone didn’t agree on every comment but they were polite in their rebuttals. For instance, there were a couple gentleman who suggested that the North Spokane Corridor isn’t necessary and that it will cut neighborhoods in half much like I90 bisected the east central neigborhood in the 50s. There was an entire contingent of Hillyard residents there who disagreed though, saying they’re going to use the freeway to make Hillyard into a showplace for the people who drive by, hopefully getting them to stop. 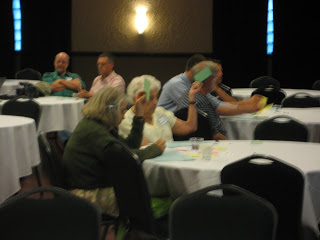 Speaking of Hillyard, those folks are hardcore! They have some big plans. One includes starting their own sustainable neighborhood using only solar power, innovative water and waste systems, and electric golf carts for transportation. And it’s all going to happen in Hillyard! This idea facinates me so I plan to follow up with the folks involved in that and blog in more length on this later.

In the meantime, one of our transportation planners, Mallory, attended the meeting and kept track of some of the sayings used by attendees that she found interesting. Her favorite? ‘Self-styled environmentalists jumping around on a pogo stick.’ 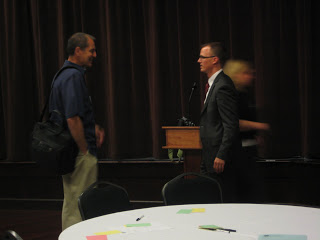