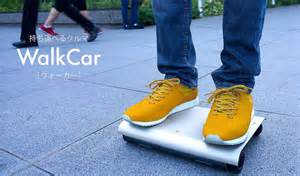 It’s not exactly a jet pack but a Japanese engineer’s new invention will get you where you’re going without driving. Dubbed the first “car in a bag,” the “WalkCar” looks like a laptop, resembles a skateboard, is small enough to be carried in a backpack and is powered by a lithium battery.

The approximately five pound transporter holds up to 265 pounds and can go just over six miles per hour for about seven miles before needing charged.
It reaches top speeds of 10 kilometers per hour (6.2 miles per hour), for distances of up to 12 kilometers (7.4 miles) after three hours of charging. It’s reportedly very simple to ride with the user simply standing on it to start the machine and stepping off to stop it. To change direction, the user just shifts their weight in the direction they want to go.
The WalkCar will be available for purchase on KickStarter this fall. It will cost about $800.