Study: Drivers Can’t Concentrate on Turning Left While Talking on the Phone 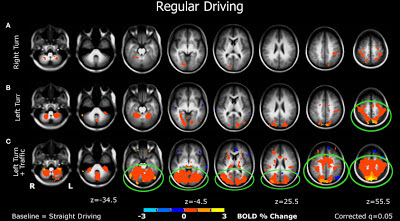 Using a bluetooth or other hands-free device may make the physical act of turning left at an intersection easier to pull off when you’re on the phone, but it doesn’t make it any safer. That’s because attempting to make a left turn at a busy intersection taxes the brain more than turning right or driving straight through. And having a conversation at the same time further impairs the brain’s ability to focus on the road, according to new data published in “Frontiers of Human Neuroscience.” Or, as researchers sum it up, “‘Hands free’ not does mean ‘brains free.'” The Atlantic takes a closer look at this study.