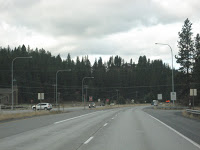 Decades of traffic pounding the pavement has taken its toll
on the concrete surface of southbound US 195 in Spokane. You’re invited
to an open house next month to learn more about a project to
rehabilitate an eight-mile section between Interstate 90
and Excelsior Road.
The open house is Tuesday, June 9, 2015 from  5-7 p.m. at St.
John’s Lutheran Church, 5810
South Meadowlane Road.
Washington State Department of Transportation staff will be on hand to explain this project. It starts July 6 and is expected to go for 16 weeks. The project
will improve the southbound lanes of US 195 using several techniques:
·
Over
650 concrete panels will be removed and replaced.
·
About
190 panels will be partially replaced.
·
Contractor
crews will also jack up more than 120 panels. That involves pumping grout under
the concrete panel to bring it up to the same level as the others.
·
Cracks
in other concrete panels will be sealed.
·
After
the repair work, the entire surface of the concrete will be ground smooth.
One
lane of southbound US 195 will be open at all times during the work. There may
be some minor disruptions to traffic near the on/off ramps and intersections.
This section of southbound US 195 was initially installed in two phases. The first segment was installed in 1955 and the next part was built in 1969.  The concrete surface is now worn with numerous cracked and broken panels, plus wheel path ruts have appeared in many locations.