Rise in Pedestrian Deaths May Be Due to Texting While Walking 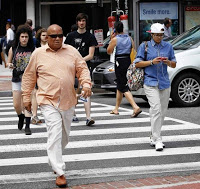 One of Transportation Secretary Anthony Foxx’s first causes since taking office is a move to fight “distracted walking.” The U.S. Department of Transportation announced steps Monday to combat a recent rise in pedestrian deaths reportedly caused by walking while texting or listening to music, or even while intoxicated.

After decades of fewer pedestrians being killed in traffic crashes, deaths rose from 4,109 in 2009 to 4,432 in 2011, and 69,000 were injured, according to the National Highway Traffic Safety Administration.

Here’s what the DOT wants to do to cut down on these deaths.