Know Your Bridge Heights If You Drive a Big Truck 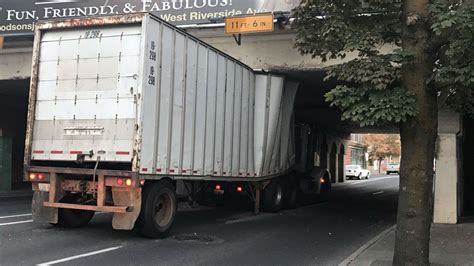 If you work in downtown Spokane, or watch the news or read the newspaper, you know that semi trucks stuck under bridges and overpasses are a fairly common occurrence around here. Especially at the intersection of Browne and Sprague. Unfortunately, many of our bridges and overpasses were built decades ago, so they were made to accommodate shorter vehicles than we have today. In a blog post from yesterday, the Washington State Department of Transportation‘s new Public Information Officer for our region, Beth Bousley, says the standard clearance level of bridges has increased by two feet since the 1950s.

As trucks and their loads grow bigger, the risk of damage to older bridges and structures increases, which could lead to major delays when contact between trucks and bridges is made. That’s why the WSDOT wants to help over-height truck drivers avoid bridge strikes like one earlier this month that damaged the Danekas Road bridge over eastbound Interstate 90 near Ritzville. A truck transporting an excavator struck the bridge, damaging several girders and breaking concrete.

The most important thing is that no one was hurt but there is so much damage that part of the bridge must be replaced, with a cost estimate around $740,000. While WSDOT does often try to be reimbursed by the vehicle operator for repair work, it’s easier and safer to avoid this type of damage altogether.

It also saves you and I – as commuters- time and frustration if this doesn’t happen. Drivers in the area now have only a one lane of alternating traffic across the bridge to cross I-90. Heavy farm equipment has to detour around the bridge due to weight restrictions. Inspection, repair and emergency declaration work also take time away from ongoing maintenance duties.

Since 2015, there have been 135 reported over-height vehicle bridge strikes in Washington. Thirteen were serious enough to close or restrict the bridge. By law, vehicle operators are responsible for knowing their vehicle height as well as bridge heights along their route.The Bridge Vertical Clearance Trip Planner helps map out routes and highlights state highway bridges with clearances that are low or that might require a specific lane for safe clearance.