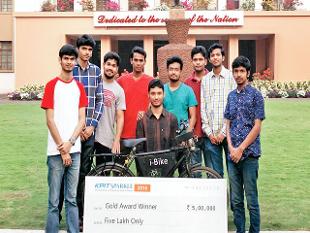 Move aside driverless cars, some Indian students have created a driverless bike. Inspired by their differently-abled classmates, these students developed an autonomous bicycle, that they are calling ‘i-bike’, according to Indian Times.
The autonomous steering, braking, drive and balancing mechanisms differentiate this bicycle from other bicycles that need a rider.

The steering hub on the bike has been modified using a gear mechanism that allows for both autonomous and manual mode. So someone who is an arm amputee could use the autonomous mode while someone with arms could steer manually. The balancing mechanism uses a training wheel based torsional spring mechanism that it is retractable, allowing it to be switched between manual and autonomous modes, depending on who is riding it. If a person has lost his/her leg(s), then the autonomous drive would provide the required energy to move ahead while the person only steers the bicycle.

The students are in the process of applying for a patent. The bike won first place in the KPIT Sparkle 2016, an annual national design and development innovation contest for engineering and science students across India.