GM Offends With ‘Reality Sucks’ (And So Does Bicycling) Ad 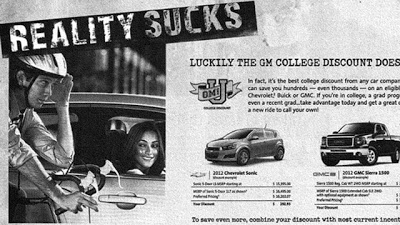 Wow, General Motors, way to offend the bicycling population. The automaker is being criticized for this ad campaign that implies it sucks to be a college student riding a bike and encourages college kids to ‘stop pedaling.. Start driving.’ And now they’re apologizing for the gaff. In the meantime, the word about this, and the subsequent backlash, spread through Twitter and other social media such as this local bike shop blog post.