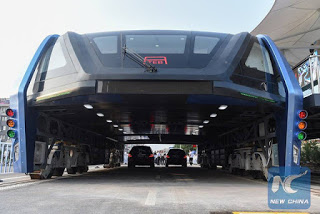 The bus, officially named the Transit Elevated Bus (TEB),  will operate above the streets, while traffic passes by underneath. It will be able to carry up to 1,200 passengers (check out the picture of the interior- lots of room) and travel almost 40 miles per hour. 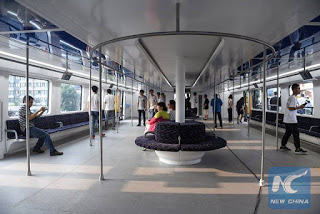 The test-run was apparently less than spectacular as it didn’t exactly simulate real world traffic conditions with just one bus carriage on a controlled track of only 300 meters in length. But even so, a lot of people were excited to see even that, as the TEB has been talked about for a long time but not much has happened with it.