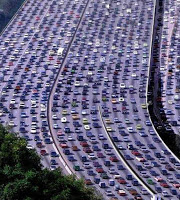 The California Department of Transportation, known as Caltrans, may be questioning the logic of building more roads in an effort to relieve traffic congestion. According to the Sacramento Bee, the department recently provided a link on their website to a policy paper from the National Center for Sustainable Transportation. That paper says constructing new roads and adding lanes doesn’t ease traffic congestion for very long because traffic quickly increases to fill the new capacity.

the theory, called “induced travel,” is basically the transportation version of the law of supply and demand. Adding capacity cuts travel time, thus lowering the “price” of driving and leading to an increase in driving. In the paper, Susan Handy, a professor at UC Davis, writes that increasing a road’s capacity by 10 percent is likely to increase vehicle miles traveled by 3 percent to 6 percent in the short run and 6 percent to 10 percent in the long term. This basically offsets any gains made initially.

So the question many are asking is does Caltrans endorse the paper? The official answer is that “solid science” shows that expanding roads does lead to more driving, so the department is fixing existing roads first and only building new roads “strategically.” Caltrans is also pushing bicycling, walking and mass transit.