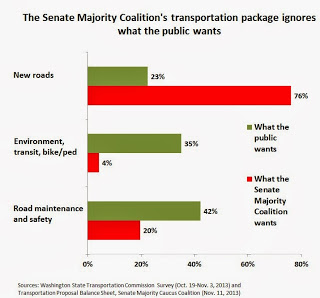 Yesterday I posted an editorial from the Spokesman-Review that said we should embrace the transportation package proposed by the Senate Majority Coalition Caucus because of funding included in it for the North Spokane Corridor.

Today I was sent this article from SightlineDaily that says the plan should be rejected because it includes everything the public doesn’t want. According to Sightline, the funding package would spend three times more money on highway expansion and new roads than constituents claimed in a recent survey that they want. And that doesn’t leave much money for anything else, like maintenance, safety improvements, transit/bike/pedestrian projects and more.
It’s a tough choice here in Eastern Washingotn. We’ve been struggling for years to come up with money to build a new freeway and this could be our final chance at a large chunk of funding. But at the same time, when staff is out and about in the public, we hear lots of comments on how we need improvements to our transit sytem and sidewalks, etc. Thoughts on the topic?