2016 Especially Deadly Year on Our Roads 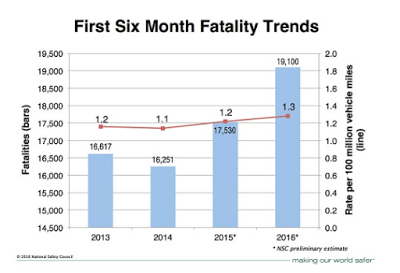 A rough year on American roads this year. About 35,000 lives are lost annually in traffic deaths in the U.S. but this year was even worse. According to Streetsblog, the National Safety Council estimates that motor
vehicle fatalities rose 9 percent in the first six months of 2016 compared
to 2015, and 18 percent from 2014. At this rate, 2016 is shaping up to be
the deadliest year for driving since 2007. This Labor Day weekend alone is projected to have 438 fatalities.

The cause? The speculation is that low gas prices have more people driving, which translates to more collisions. As I reported on this blog yesterday, the first half of 2016 hit a new record for the number of vehicle miles driven- up over three percent from last year.