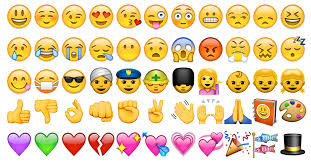 This is bizarre to me, but a new survey says younger drivers better recognize emojis than road signs.


According to Insurance Business Canada, the survey of 1,000 young drivers by insurer More Th>n, (a subsidiary of RSA) showed that
more than six in ten (61%) of drivers aged 17-25 understood emojis better, demonstrating how embedded they are in millennials’ lexicon.

The surveyed drivers had difficulty identifying standard road signs for zebra crossings, ring roads, no bicycles and steep hills. The sign for a ring road was mistaken by 27% of those surveyed as a sign for a ‘carbon neutral road’. Meanwhile, 25% thought that the sign for ‘no vehicles carrying explosives’ was a warning of spontaneously combusting traffic.

Unfortunately for young drivers (but probably fortunate for us older drivers who might get confused) there is little prospect of official road signs ever becoming like emojis.